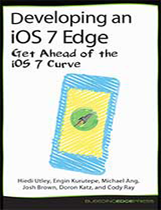 "I learned a ton here, especially about areas that I have not yet explored in the SDK (most of the later chapters)." – Matt Coneybeare

Many of the features added to iOS 6 were incremental updates over iOS 5. This is not the case for iOS 7. Apple's release of iOS 7 brought substantial improvements for both applications and application developers. This book attempts to highlight the features that will be most widely applicable, including upgrading from iOS 6 to iOS 7, making apps more accessible, refreshing content in the background, using the new transition and physics-based animations, building on the new maps APIs, and enhancing your development workflow with the new build and testing improvements. The introduction of iOS 7 is set to change the way users think about native applications as well as how developers think about building them.

This book is intended for current iOS developers who wish to learn what iOS 7 has to offer. It is not intended to be a beginner's tutorial on iOS development. In many cases, we contrast development for iOS 7 with developing equivalent functionality in iOS 6. As such, we assume the reader is familiar with basic iOS development concepts up to iOS 6. While it's not necessary for the reader to be an expert in any particular iOS 6 APIs, it certainly won't hurt. Similarly, this book is not intended as a reference manual for iOS 7. The online Apple documentation serves this purpose. Rather, we aim to provide an overview of the features as the reader might use them to build a working application. The examples given in this book are all part of a demo application called BepBop ("beep! bop!").