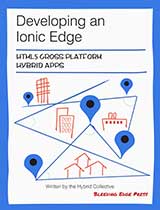 By The Hybrid Collective

Check out the Trendicity app, the example app used in this book and your starting point for learning how to build hybrid mobile apps using the Ionic Framework. Also visit the Ionic 's official blog for ongoing updates about this fantastic framework.

"I can’t say that there is anything out there that is comparable to this book. I am not aware of any other books like this that are being developed. I believe this book captures the powerful capabilities of Ionic compared to what other resources are available."
– Andre Dublin, Software Engineer

"The addition of such a cool sample application to study is absolutely awesome! Kudos."
– Michael Ebo Turkson, Mathematician and Software Engineer

"This book differs from other Ionic books by providing a full example app with source code to work through instead of having the reader try to build it as they go (which often does not get the same result). I have read a few online articles on Ionic development but none come close to the detail of this book."
– Damian Karzon, Windows App Developer

"A good read and a great introduction into building a full app with real world services.The examples are nice and make you feel like you’ve achieved something."
– Jamie Sutherland, CTO of Mallzee

Ionic helps you develop rich and robust applications based with a powerful yet flexible framework at its core: AngularJS. With an emphasis on native performance, Ionic plays nice with Apache Cordova to build native-like hybrid mobile applications for both Android and iOS platforms. It even provides its own wrapping command-line interface (CLI) in order to build, test and deploy Cordova-based mobile applications. With tons of popular mobile components, typography, and a gorgeous and extensible base theme, Ionic has been designed to work and display beautifully and consistently on all current mobile devices.

This book walks you through the process of starting, developing, customizing and deploying a mobile application built with the Ionic framework and AngularJS. The authors dive head first into the development of Trendicity, this book’s mobile application developed to demonstrate as much of Ionic’s features as possible.

This book was written for anyone interested in developing cross platform mobile applications. Before reading this book, readers should have at least a basic knowledge of web (application) development in general, including HTML & CSS and Javascript. For a better understanding of our example code and Ionic's features, it would be best if readers also have experience with JavaScript and in particular the AngularJS framework.